Masturbation was common in men and women, but it is important to note that, although it was a gift from the gods, it was considered a private and very personal activity, although as every rule had its exception. For example, the philosopher Diogenes raised his toga and masturbated in front of the public in the agora. Obviously the town was surprised and the girls-some more, some less-blushed. Diogenes tried to teach that all human activities deserve to be done in public, that none of them is so shameful as to require privacy. In any case, although innovative and daring in every way, his proposal, his contemporaries did not agree and it was not seconded.

The famous Greek doctor  Galen argued that the semen retention in the organism was dangerous and causing bad health. He cited the same Diogenes as an example of a cultured person, who practiced sex and also masturbated to avoid the risks of retention.

The biblical story of Onan, often cited as a text against masturbation, actually refers to the sin that Onan committed in refusing to obey God’s command to impregnate his widowed sister-in-law. Onan copulated with her but retired before ejaculating and “shed his seed” outside the woman’s body, that is, she performed a common and wild coitus interruptus. The Law of Moses dictated that anyone who spilled their semen on infertile land was doing it in the wrong place. In the 16th century,  Martin Luther confused that interrupts with “palm of the hand”, and with that contributes to increasing the stigma that he was already carrying.

For the fifteenth century, the theologian  Jean Gerson in his penitential model  De Confessione Mollities, taught priests how to induce women and men to confess “that detestable sin”. Gerson suggested guiding them with an innocent question like this: “Friend, do you remember having your penis erect during your childhood, around 10 or 12 years old?” Then, he suggested going directly to the penitent if he had touched or ejaculated.

The penance manuals also specified the corresponding penalties, which, it must be said, were relatively minor compared to other penalties. They usually fluctuated in the range of thirty days of special prayers and fasting. Come on, a trifle.

At the end of the 16th century, the scientist  Gabriello Fallopio taught the males to pull their penises energetically and frequently to stretch it, strengthen it and in this way increase its procreation power, but their theories were equally repudiated by the church.

“… I went to his home and what I found was more a corpse than a living being lying on hay, skinny, pale, exuding a nauseating stench, almost unable to move.” Blood flowed from his nose, he drooled constantly, he suffered attacks of diarrhea and defecating in his bed without noticing, there was a constant flow of semen, his eyes, bulging, blurred and dull had lost all ability to move, his pulse was extremely weak and accelerated, his breathing was difficult, he was totally emaciado, except on the feet that showed signs of edema. “

“The mental disorder was equally evident, he had no ideas or memory, he was unable to connect two sentences, he had no capacity for reflection, without fear for his fate, lacking in any feeling except for the pain that returned at least every three days with every new attack, this sank him to the level of a beast, a spectacle of unimaginable horror, it was hard to believe that he had ever belonged to the human race, and he died several weeks later, in June 1757, with his whole body covered with edema. “

“The problems experienced by women are as explainable as those of men, because the moods that they lose are less precious, less perfect than male sperm, they do not weaken so quickly, but when they surrender excessively, because their nervous system is more weak and naturally more inclined to spasms, the problems are more violent. “

Likewise, in this same time, a curious phenomenon was presented: doctors used to fight female hysteria by manually caressing the clitoris of the patients until they could reach orgasm, which at that time was known as hysterical paroxysm since they considered sexual desire female repressed was a disease. Incredibly this custom gave rise to the birth of the vibrators since the doctors were tired of manually manipulating “so many clitoris”.

Woman in “hysterical paroxysm” after being masturbated by a doctor

Until the nineteenth century, this was the image of a man who masturbated

It’s curious. Men, society, could accept Kinsey’s report on male sexual activities, but they could not accept “the harsh reality” of American women’s sexual behaviors. It was like a shock, like a bucket of cold water to machismo, finding out (or being told in the face) that a woman could masturbate, have orgasms, have sex before and outside of marriage or with other women. The church raised its voice of protest throughout the country. Without even taking a look or reading Kinsey’s work, the then charismatic religious Billy Graham wrote: “It is impossible to estimate the damage that this book will cause to the already deteriorated American morality.” The shaking was such that even a Senator (as always, McCarthy) denounced Kinsey’s work as part of the communist conspiracy. Throughout the country, people with the surname Kinsey published notices in the newspapers to clarify that they were not related to the author. Finally, and because of the furor, the Rockefeller Foundation withdrew its support for Kinsey’s research work, but it was too late, society (at least the Western world) had shed sexual taboos.

Doing a brief review we can see that thanks to the release of dopamine that produces can act as an analgesic and alleviate headaches or, as Dr. Mariano Rosselló explains, premenstrual pain. It also prevents prostate cancer or dysmenorrhea (menstrual pain) and contributes to the production of Immunoglobulin A, an antibody that acts as an initial defense against viruses and bacteria.

Some sexologists associate it with increased self-esteem and decreased symptoms of depression, but the data is inconclusive. And in many cases, the data show that orgasm plays a key role in the prevention of cardiovascular diseases. Of course, that by this rule of three, make the laser too. Also, and this you will not believe, you can help with hiccups.

The privatization of sexual pleasure

At some point in history, coinciding with the invention of agriculture and livestock, human beings invented monogamy. No, monogamy is not the ‘natural’ state of humanity (meaning what that means of ‘natural’), studies of primitive societies show that it was usual for a relatively small clique of men to ‘monopolize’ all women of the tribe.

Suddenly, however, something happened. The imposed monogamy (that is, the exclusive sexual bond with only one partner) came, saw and won. Such was his success that in the old documents he appears as something essential. In most traditional legal bodies adultery is severely punished (one only has to look at Torah or Shariah to see examples of this).

In the year 18 before Christ, the emperor Augustus promulgated the Lex Iulia of adultery which not only typified the adultery committed by a married woman as a very serious criminal offense but forced the husband to publicly denounce it once he knew of infidelity.

By this, I mean that the application of coercive methods, whether moral or legal, to adultery, is a constant throughout history. We do not know very well why, the truth. A few months ago, a German-Canadian research group published an article in Nature explaining that sexually transmitted diseases played a key role in the emergence of monogamy.

According to his theory, primitive agriculture allowed for the first time communities of more than 300 people and also created the perfect breeding ground for diseases such as gonorrhea or syphilis became endemic. In these circumstances, traditional practices (not monogámicas) harmed those who had many relationships. It is a theory. Be that as it may, monogamy triumphed and shaped much of the social world we know today. 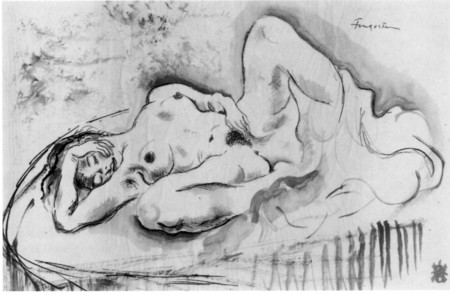